Mr. Fouad Makhzoumi welcomed the meeting between Prime Minister Hariri, King Abdullah and President Asad: the Israeli threats to Lebanon call for the highest degree of Arab coordination and solidarity

The head of the National Dialogue Party, Mr. Fouad Makhzoumi, welcomed Prime Minister Hariri’s Arab tour, in particular his meetings in Saudi Arabia with the Saudi monarch, King Abdullah, and in Damascus with the Syrian president, Bashar al-Asad, especially as these came in the shadow of the continued Israeli threats to Lebanon and Syria, a matter which calls for the highest degree of Arab coordination and solidarity.
Mr. Makhzoumi strongly criticized the rhetoric of some politicians in Lebanon regarding the separateness of Syria’s Arab identity, considering this to be talk which seeks to sow division between the influential Arab states, particularly between Syria, Egypt and Saudi Arabia, and certainly Qatar and Kuwait and other Arab countries. He drew attention to the important roles which have been played by these states in defusing the crises in various Arab countries, including Lebanon.
Mr. Makhzoumi welcomed the visit by the Emir of Kuwait, Sheikh Sabah al-Ahmad al-Jaber al-Sabah, to Lebanon, citing Kuwait’s role in supporting Lebanon’s steadfastness, particularly in the face of Israeli aggression. Mr. Makhzoumi emphasized that the promotion of closer relations with Damascus must be one of the priorities of the Lebanese government. Special relations with Syria are necessary for Lebanon and Syria is a source of reassurance to the Lebanese people at times of misfortune, whether internal or external. And so, how can the government of Netanyahu fabricate excuses and pretexts for waging war on both our countries?
Posted by Hizb Al Hiwar at 1:15 PM No comments: Links to this post

Makhzoumi: the difficult regional situation requires the improvement of the political performance

The head of the National Dialogue Party, Mr. Fouad Makhzoumi, stated that the hectic atmosphere of the last two phases of municipal elections is not commensurate with the reality of the municipal work or with the circumstances in the country in terms of political developments, whether positive or negative. He also stated that the Turkish-Brazilian-Iranian agreement relating to the exchange of Iranian uranium for nuclear fuel in Turkey is a positive step with regards to the area and particularly the Gulf region. This also serves to help remove the explosive situation from the hands of Netanyahu’s extremist government.
Mr. Makhzoumi expressed his view that the priority in Lebanon must be to revitalize governmental work and deal with the issues of the citizens. The difficult regional situation stemming from the Israeli threats to Lebanon and Syria calls for improved political performance by the various political powers, particularly those affiliated with the national unity government. The conflict over the municipal councils on the importance of these councils for development and for services to the citizens is unacceptable and does not make any sense. These councils have no power in the absence of administrative decentralization. In any case, these councils must not engage in conflict or become measures of victories or defeats for whatever reason. The maintenance of national unity and civil peace must be the priority.
Posted by Hizb Al Hiwar at 1:08 PM No comments: Links to this post

Hizb Al Hiwar
Beirut, Lebanon
To activate a comprehensive national dialogue that would lay the foundations for political, administrative and judicial reforms and aim to achieve social justice and balanced development and provide equal opportunities for a stable and sound society. 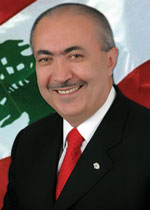